On Saturday we went along to a TEDx talk in Norwich. It was focussed around education but it wasn’t just all about teachers, even though a lot of the people there were teachers or worked directly in education.

We didn’t know what to expect, with our only experience of TED and TEDx being from the cut-down YouTube videos showing each individual talk. It turns out that it’s just like a conference (this comparison made by Tom as I’ve not been to a conference before). We’d signed up originally not knowing the topic was on education, so we were also unsure about the topic and if it would be relevant for us, but it was. When we thought about it, Tom’s always wanted to go into teaching, I like writing documentation that helps people learn on their own.

The  compère (Jon Briggs @voiceofsiri) introduced all of the speakers, asked them questions after their talk (if there was time), kept everything on schedule, and provided a much needed break between each talk. His voice was incredible and he seemed very genuine.

The talks themselves were divided into four sections: Be Different, Engage, Be Brave and Lead. A nice feature was that at the start of each of these sections, we were shown some of the TED talks that had already been performed on education. These were some really inspiring talks from American educators As for the talks themselves, they were as follows:

One of the talks that had the most effect on me was Mark Stevenson’s talk on training developers. He had a similar experience to me at university where he was told to learn java but didn’t have a passionate lecturer to show how programming can be fun rather than a struggle. He was lucky to get that enthusiastic lecturer, I wasn’t. Things could have been really different for me if I’d have had that encouragement. Mark also talked about encouraging learners – people who want to learn new things and develop – rather than earners – people who show up and only do what is required of them, not continuing to develop their skills.

I also enjoyed Owen Morgan’s talk on excellence and how we’ve been equating that with results, which is the completely wrong way of thinking about it. For example, sales guys lying through their teeth to get a sale (I use that in the most general terms, I’m sure they’re not all like this) will get sales and therefore results, but what they are doing can’t be considered excellence due to the methods they employ.

Vic Goddard’s talk about his time on “Educating Essex” was also enjoyable (I sat next to him and didn’t even realise who he was!). The focus was on fighting back against feedback that his TV show would discourage new teachers from coming into the profession but all of the clips he showed were so sweet and lovely, showing the nice side of teaching and learning, and how a good teacher can really help young people. I can’t say I’ve watched the show, but the clips from it nearly encouraged me to start thinking about teaching again (if only my overwhelming sense of dread over failing the children didn’t pipe up :oops:)

Siam Kidd’s talk raised some interesting points but was very controversial. A lot of the teachers around our table were shaking their heads and bickering to each other about how terrible an idea it was. His idea was to set up schools that had very different focuses to our current system. Most of the focuses seemed to be on his own life – firmly based in military training, encouraging learning about finance etc – but although some of his ideas were a bit odd, they did have some useful qualities if you pared them back a bit. For example, emotional and social awareness is really important, and relationship advice too.

Other talks that I enjoyed were from Tom Gilliford, Ian Dyball, Vickie Allen and Alistair Bryce-Clegg. Having said that, all of the talks had really interesting ideas, these are just the ones that stood out for me.

The common theme of embracing failure and being able to cope with and plan around it was also really nice to see. If you aren’t afraid to fail then you’ll try so many more things – because it doesn’t matter if you’re good or bad at it.

As well as the talks, there were several areas for more hands on learning. 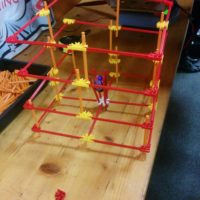 It’s surprising just how much focus and energy it takes to listen to people speak for an entire day – even with frequent breaks. By the end of the third section we were all well and truly knackered. Although we wanted to stay for the rest, Tom was feeling pretty bad (possibly coming down with a cold), so we headed back home, talking about the day for the whole journey.