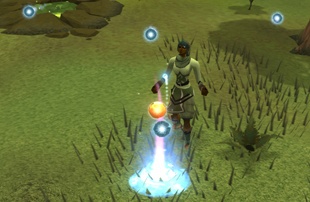 Getting memories from a wisp

Before his death at the end of the Fifth Age, Guthix ensured the peace of the Fourth and Fifth Ages with a magical shield over Gielinor. This shield, built from massive reserves of energy surrounding and infusing the world, was dedicated to keeping out unwanted divine influence. Besides a substantial investment of his own divine power, Guthix redirected energy from the Anima Mundi, balancing a delicate cycle of magic that passed through him, the world and the shield. The amount of energy tied up in the world shield cannot easily be imagined, but even while Guthix slept the barrier remained strong.

When Guthix died, the shield collapsed. With one part of the cycle suddenly missing, the energies of the shield escaped into Gielinor, raining down on it and infusing the land with new power.

The Battle of Lumbridge caused further harm to the Anima Mundi, even as it reeled after the dissipation of the power it had lent to Guthix’s shield. This damage is gradually becoming evident, with a number of rifts – similar to but much smaller than the one in the centre of Lumbridge – forming independently around the world, each reaching straight to the world spirit itself.

Wisps live in colonies of the same type and there are 13 colonies. These colonies do not move around the world, but the wisps that are part of them may wander around the nearby area. The colonies are:

Clicking on a wisp will stop it from moving and it will turn into a spring of energy that will last a random amount of time between 3 and 45 seconds. This time is not affected by gathering from it.

You can gather energy and memories from these springs for use in the Divination skill. You will not always get memories for harvesting, although you will always get energy and XP.

Some wisps look different to the others. These are enriched wisps whose appearance can be prolonged by the first four players (of the correct Divination level and with a memory in their inventory) to click on the wisps/springs. This will donate a memory to the wisp in exchange for it staying around longer. Enriched memories provide double XP when converted than normal memories.

When you have a full inventory you’ll need to find a crater to return your memories to the earth. These can be found near any of the wisp colonies. When you click on the crater, you will be presented with the following options:

The memories that you convert will provide you with energy which can be used in combination with other materials (except when creating Boons, as these only require energy) to make various useful items.

The eastern section of the Amlodd clan area of Prifddinas is overrun with shadows that have been lured to Gielinor by the Amlodd elves. They have opened rifts around the area to draw the shadows in so that the elves can slay them and cleanse their cores. You too can vanquish these Slayer creatures and cleanse their cores by offering them to the light rift at the center of the area for Divination XP.

1. Do I need any special equipment to level this skill?
There are no items or pieces of equipment needed to level the Divination skill.

2. Why should I level a gathering skill if it does not support another skill?
Although it does not currently, the Divination skill does in fact support other skills. Modifications to these skills which allows for this is not due for release until late 2015, however.

3. Where do I get the skill cape?
For those who achieve level 99, you can speak to Orla Fairweather who will sell you a skill cape to show off your accomplishment. You can find out about skill capes in the Capes of Accomplishment page.

4. Can anyone teach me how to train Divination?
There is a small camp, north-west of the pale colony where you will find a number of individuals practicing their skills at Divination. Among them are Orla Fairweather, Faizan Augour and May Stormbrewer who can each teach you of the various aspects of Divination.

5. Can I use the Divination skill in Dungeoneering?
You will find wisps on all floors of complexity 6 dungeons.

The following skills help with the Divination skill:

For quests that give Divination experience as a reward, please refer to the Quest Experience Rewards category.

There are no minigames that help with the Divination skill.

The following D&Ds help with the Divination skill: