When you have entered the correct sequence of runes, Sliske will be able to bring the gate back from the Shadow Realm. After speaking to Azzanadra, step through the World Gate into Freneskae.

You’ll need to move through the area quickly as the land of Freneskae is dangerous:

Move from the World Gate

towards Zaros’ Sanctum. You’ll need to cross a number of obstacles

to get there. You will also find memoriam crystals

along the way which can be clicked on to gather the crystals though these cannot be used at this time. Note also there is a bridge

that cannot be crossed at this point. To get all of the memoriam crystals, follow the yellow path, to just head to Zaros’ Sanctum, follow the cyan path. 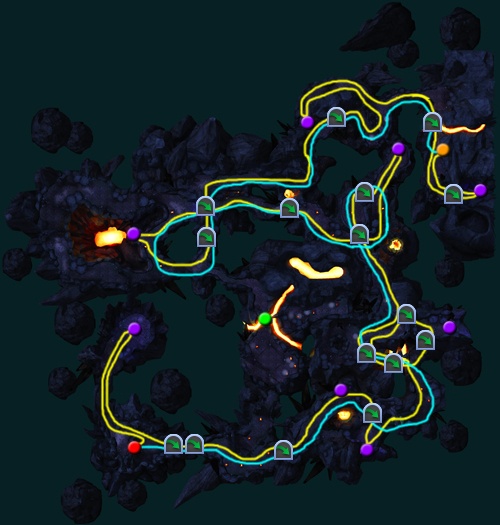 Once inside Zaros’ Sanctum, head north from the entrance

There is a memoriam crystal

in this room, and you’ll also find a memoriam device

in the center of the room which you can click on to place any memoriam crystals you have found. You can view the memories linked to the crystals from this device.

at the far end of the room to scare off whatever is knocking on it. You’ll need to unlock the door by working out the correct combination of symbols.

Click on the dials to rotate them, all of the adjacent symbols need to match each other. There are three locks to remove in this fashion.

Once you have opened the locks, head through the mist and click on the opening

to move into the next area. 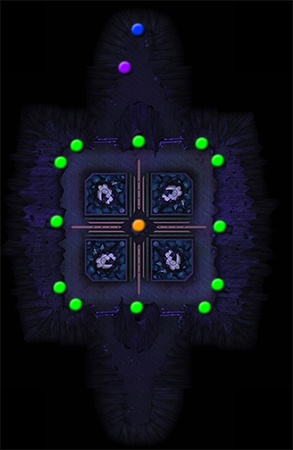 , and several nihil will charge out of holes

Avoid the nihil’s charge attacks where you can, and hit them to make them stop in their tracks. It is best to approach from the sides to avoid their charges and get a hit in. You will probably find it best to fight them one at a time. There are four nihil to defeat, each with a normal attack, a charge attack and a special attack:

Once the nihil are defeated, exit the area through the door

to the north. Note that there is a memoriam crystal in this room near the exit.

Exiting Zaros’ Sanctum you will climb up a mountain and find yourself in the crate of a volcano. Approach the statue in front of you and Zaros will appear to speak to you. He explains the statue is not a statue, but Mah – an elder god.

Zaros will teleport you into your own mind so that he can speak to you more clearly and without Mah finding out his plans. His only way of gaining corporeal form is beneath Mah and Zaros needs your help to get at it. You can ask Zaros about his past and his plans before making the choice to help him. You need to find out how Zaros was made, and what he will need to make his new form (you can always say you’ve made up your mind and ask that Zaros give you the crucial information).

When you have heard what Zaros needs, he will tell you that you must survive Mah long enough for her nightmares to subside. Zaros can help you, but you’ll need to let him inside your mind. Decide whether you want to allow this or not, and you’ll be sent back to the volcano crater.

Approach Mah to begin the fight. Mah will dream into existence muspah of three types: ranged, magic and melee. You’ll need to survive for a set amount of time – roughly 5 minutes.

The muspah are level 150, have a large amount of life points and are weak to spells cast from the Ancient Spellbook. For each muspah killed, another will spawn after a small delay. The replacement will be picked at random.

Mah’s herself will ‘attack’ the player with violent screeches that send out a shockwave that stuns you and causes 1/5th of your maximum life points in damage. Mah’s attacks will also damage the muspah by a large amount.

As the fight progresses, Mah’s attacks will become more frequent and more muspah will spawn.

If Zaros is inside you, you will have infinite prayer points and runes for spells from the Ancient Spellbook.

Once the fight has finished, Mah will run out of power and fall back to sleep. Any remaining muspah will dissipate into the ether.

Climb down the ledge to the east of Mah’s face and you’ll find yourself within the volcano.

Within The Elder Halls

Within the Elder Halls 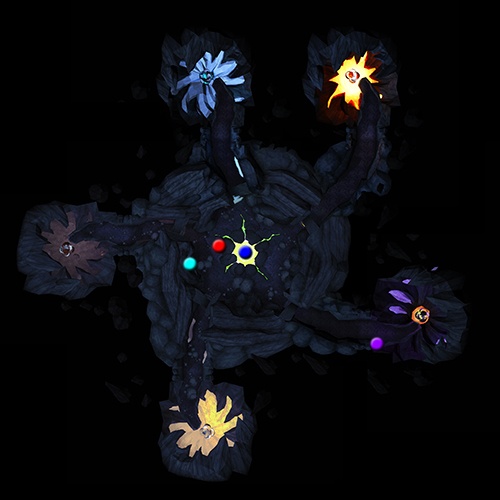 You will find yourself in the Elder Halls of Freneskae. Note The Measure

in the ground. Its pulses will reveal hidden mah wisps which you will need to harvest from. Pick up the measure and you’ll see translucent wisps where you walk. Place the measure down in order to make the wisps solid so that you can harvest from them. You’ll need to collect 250 mah energy from the wisps. Any gained memories can be converted into energy at the rift

in the center of the room.

When you have 250 mah energy, weave a divine simulacrum of either colour depending on whether you want to help or hinder Zaros (a dark one is what was requested, and a light one will reject Zaros), then exit the area via the rock face

Note there is also a memoriam crystal in the Elder Halls.

You’ll find Zaros waiting for you in front of Mah. Speak to him and offer him the simulacrum of your choice. Your choice of simulacrum will determine Zaros’ appearance but he won’t have time to thank/chastise you, as Mah will being to stir in her sleep again…but this time she is actually waking up. Zaros will teleport you away to the World Gate. He will explain something to you before Mah becomes too close and you must escape through the gate.

On the other side speak to Azzanandra, and confirm that you’re ready for Zaros to return. When you have seen all of Zaros’ orders to his followers, and accepted the Shard of Zaros, your quest will be completed.

Note that at this point, having gathered all the memoriam crystals, you are still 5 short. These must be gathered on Freneskae.

Four of which can be found in the approach area, as the bridge that was previously inaccessible can now be crossed. Tag the glowing crystals to build up a static charge. This will attract lightning to the area making it more dangerous for you to be there. After enough charge has been built up, one of the four crystals will be unlocked and the static charge will dissipate. Repeat this process for the remaining 4 crystals.

The final purple crystal can be found in the volcano crater, where Mah was sleeping.